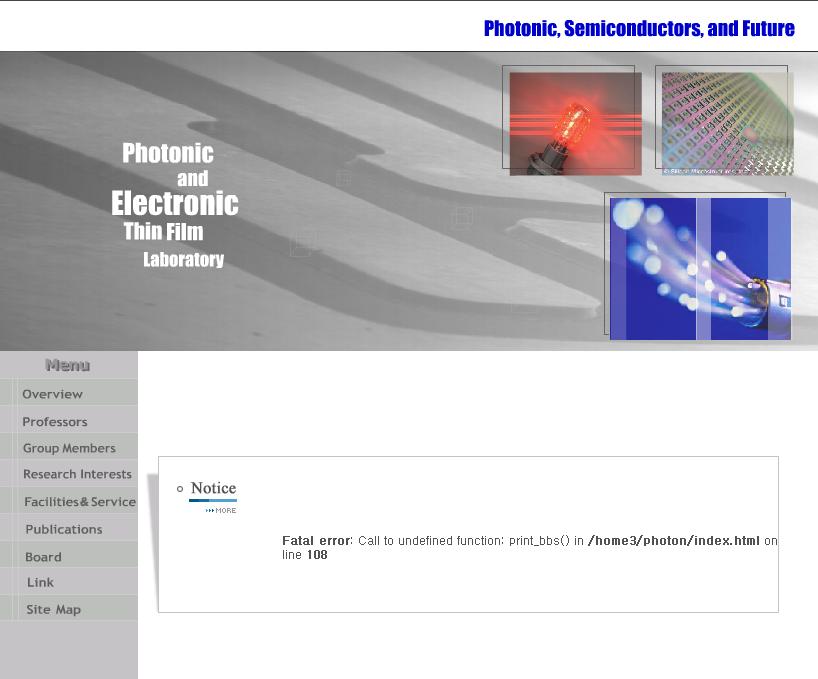 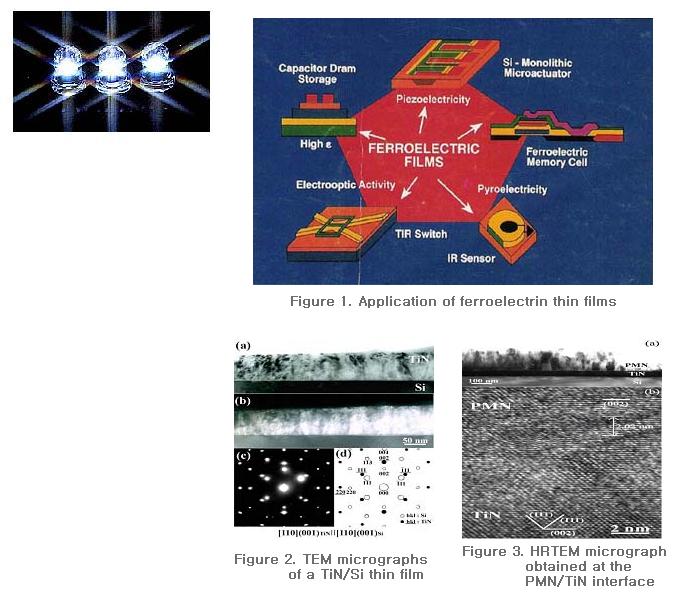 Photonic and Electronic Thin Flim Laboratory has been established in 1999 ain Chonnam National University. Our laboratory concentrates on the development of aadvanced photonic and electronic thin films such as wide bandgap materials a(GaN and ZnO), ferroelectric materials (Pb(Mg,Nb)O3 and Pb(Mg,Ta)O3), and optical aglasses (silicate glasses and tellurite glasses). Thin films are prepared by various adeposition processes such as sputtering, MOCVD, PLD, and chemical solution adeposition. Their optical, structural, and electrical properties are characterized, and a then the characterization results are used to control the process variables for the apurpose of the formation of high quality thin films. There are five faculty members, two apost-docs, three Ph.D. students, and fifteen master students in the laboratory. aFundings are coming from variety sources like NRL supported by the Korean Ministry aof Science and Technology, other government agencies, and industries. We are aactively doing collaboration works with universities, industries, and research institutes adomestically as well as internationally and reporting more than 20 SCI papers a year.

Light emitting diodes (LEDs) and laser diodes (LDs) are essential components for optical telecommunications and information technology. Very recently, the research on ZnO has been revived because of its potential application as short-wavelength (UV and blue) LEDs and LDs. ZnO is a direct-band-gap semiconductor with a wide energy gap of 3.3 eV at room temperature (RT) and being thus considered as a promising material for these devices. Moreover, it has a higher exiton binding energy of 60 meV at RT comparing to GaN (28 meV) that is currently used for UV/blue LEDs and lasers. This higher exciton binding energy may produce more efficient lasers at RT. The recent reports of success in optically pumped lasing in epitaxial ZnO thin films have further stimulated great interest in ZnO material. In addition, the band gap energy of ZnO can be tuned by alloying with MgO and CdO. Furthermore, thin films of ZnO having a good quality can be grown at much lower temperatures than GaN, which enables the growth of ZnO on Si or glass substrates. One of the main obstacles in the realization of an UV/blue light emitter using ZnO material is the difficulty in making good p-type ZnO. Some research groups claimed the success in growing p-type ZnO films. However, it is general opinion that p-type ZnO has not been achieved yet from the viewpoint of reproducibility and quality for practical application.

Our laboratory has been depositing homo- and hetero-epitaxial ZnO thin films using MOCVD, sputtering, and PLD on various substrates. Through doping and plasma activation, we are attempting to make reliable p-type ZnO films. We also try to fabricate and realize p-n junction diodes, bandgap engineering, and multiquantum well structures in ZnO-based material systems.

Integrated optics devices are now considered for applications in additioin to optical communication (e.g., sensors, optical computers). A waveguide forms the basis for integrated optical devices. Different technologies have been employed to achieve waveguides in various materials. Glass is an interesting substrate material for integrated optics because of its relatively low cost, excellent transparency, high threshold to optical damage, and availability in substantially large sizes. It is also mechanically very rigid. Furthermore, glass substrates are amorphous, and it is easier to produce polarization insensitive components in glass. In addition, the refractive index of glasses used in integrated optics (e.g., silicate, phosphate, tellurite) is close to that of optical fiber and therefore, coupling losses between the waveguides made in glass and the optical fibers are smaller. Faculty members and students are designing and fabricating ilicate and tellurite glasses for laser and photonics applications, such as waveguide lasers, fiber amplifiers, and integrated optics. Also facilities exist for making both surface and buried waveguides for making passive and active components for the optical communication applications. We are preparing glass thin films using a number of thin film deposition facilities including FHD, AFD, CVD, and Sputtering. We are also trying to haracterize their optical and structural properties and to understand the effects of process variables on the optical properties of planar waveguides formed glass thin films.